World No.10 Olivia Fiechter has reached the quarter finals of the Allam British Open for the first time after the American upset the seedings to take out Egypt’s Rowan Elaraby at Hull’s Allam Sports Centre.

Fiechter – the United States No.2 – produced a terrific performance to nullify No.7 seed Elaraby’s attacking talents and claim a 12-10, 11-7, 11-9 victory which will see her line up in the last eight of the PSA World Tour Platinum event for the first time.

Her quarter final opponent will be close friend, and her roommate this week, Amanda Sobhy. Sobhy, the USA’s No.1 player, overcame England’s Jasmine Hutton in straight games, winning 11-9, 11-7, 11-8. It will be the first time that two American players will both appear in the last eight of the British Open at the same time.

“It’s such an exciting time to be a part of Team USA, we have a lot of players playing amazing squash,” said Fiechter.

“We had four players in the last 16 across both men’s and women’s and Amanda and I have been playing the entire week leading up to this.

“I think, especially after my match before this where I was 2-0 down to Tesni Evans, I knew I had to get myself going from the start. Rowan just had one of her best results, reaching the semis at Black Ball, so I knew she’d be coming here playing confident squash. I knew I had to do the same.”

Meanwhile, World No.68 Nour El Tayeb made her first appearance at the British Open since 2019 as she got the better of Belgium’s Nele Gilis by a 3-0 margin. El Tayeb, who missed out on the 2021 edition after giving birth to her daughter, will line up against World No.2 Nouran Gohar next. 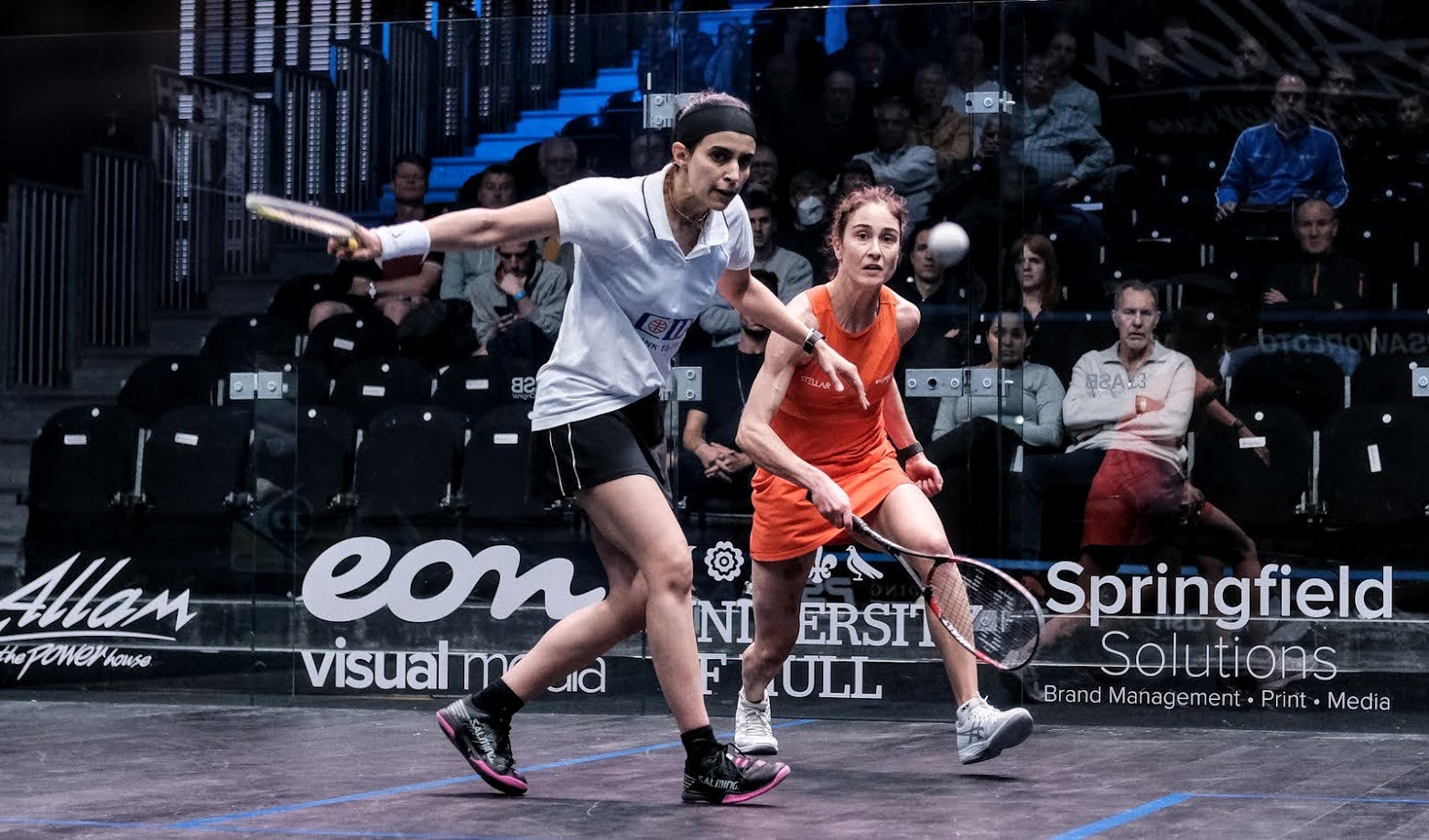 “It’s very hard to play, running around with a baby all day. Nele beat me a month ago in Chicago, so I’m very happy with the way I played and to be through. I think last time I started badly, I was playing her game and today I tried to insert some shots. Every day I’m improving since my comeback, and today I think I’m a better player than last month.”

Gohar, who will go to World No.1 when the PSA Women’s World Rankings for April are released, underlined her status as the sport’s greatest current female player with a commanding win over Sobhy’s younger sister, Sabrina.

No.4 seed Mostafa Asal ended English interest in the men’s event as he took out the country’s No.1 male player, Patrick Rooney. It was a clean, high-quality affair, with Asal’s extra quality making the difference at the business end of each game.

“I’m very pleased to play here on this court, it’s a legendary tournament as well,” said Asal, after reaching the quarter finals here for the second time.

“I want to thank Patrick for the fair play and free-flowing squash. I used to watch him at the British Junior Open with all of his skills, and me and my dad used to say ‘wow’ when we watched him. I want to thank him for an amazing performance.”

Asal will play 2018 champion Miguel Rodriguez in the last eight. Rodriguez, the World No.12, followed up his second round upset of No.8 seed Joel Makin with a 3-1 win against Egypt’s Youssef Soliman.

World No.1 and defending champion Paul Coll continued his title march as he claimed a 3-0 win against France’s Gregoire Marche, and he is rewarded with a quarter final fixture against close friend and regular training partner Diego Elias.

“One of the things I love most about squash is constantly evolving my game and adding different parts,” said Coll.

“I’m learning and making myself better every day, it’s one of my favourite parts of being an athlete. That’s why I analyse every day and continually try to figure out what works best. I did exactly what I wanted to, I maybe could have been a little more clinical at the front, but overall I’m very happy with that.”

The quarter finals of the Allam British Open take place tomorrow (April 1) and play begins at 12:00 (GMT+1). All of the action will be shown live on SQUASHTV.